Last summer, as part of our European road trip, we found ourselves with 6 hours to spend in Strasbourg, the capital of  Alsace and official seat of the European Parliament.

You can easily spend several days in this beautiful city on the eastern border of France (with Germany) with remarkable architectural influences of the two countries.  Situated on Grand Ile (on river Ill), Strasbourg’s historical core is compact enough for a lovely 6-hour “walkable” introduction.

(For a full list of Strasbourg experiences check out this Get Your Guide booking site).

The most centrally located Underground Parking in Strasbourg is on Place Gutenberg (Place Gutenberg, 67000); but it was full so we followed signs to a nearby parking Austerlitz.  From there, it was a 5-minute walk to the Cathedral Plaza to pick up our passes at the Strasbourg Tourist Office.

On our way, we have passed this fun Alsatian outdoor celebration at the Gutenberg Plaza (Place Gutenberg). 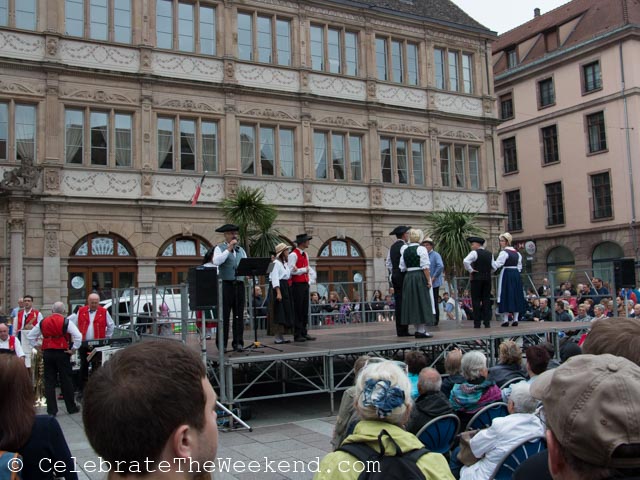 While everyone was looking at the dancers, our daughter spotted the Carousel.  She is still at that happy age when she must ride a carousel when she sees one.  We (almost always) happily oblige. 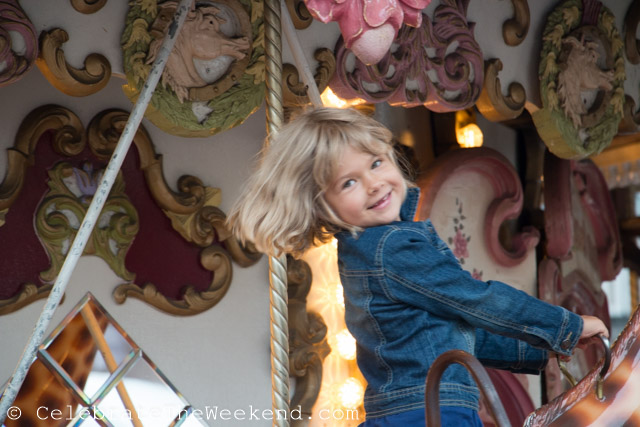 It was not exactly a sunny day, and feeling the drops suspended in the air, we decided to first explore the city by boat (we did not have to worry, as the boats have glass roof).  With our Strasbourg Passes now in hand, we headed to the ticket counter of Batorama boat cruise on 15 rue de Nantes (located behind Palais Rohan, just a several minutes walk from the Cathedral Square).  Tours are offered year-round, check the website here for departure times (varies by season.)  Note that Strasbourg Pass holders need to exchange the “stab”  from the Pass with actual tickets at the booth (another “caveat” is that the tours between 2-4 pm are not available for the Pass holders’ free access).

I love  touring by boat and here in Strasbourg it is a great orientation to the city as the river flows right through the historic center. Our 70-minute tour along river Ill called “Strasbourg over 20 centuries of history” (with audio commentary in 11 languages) took us through  Petite France area and all the way to the European Parliament buildings of the “European Quarter”.

After the boat tour, we were inspired to explore on foot with the help of audio-guides which we have picked at the Strasbourg Tourist Office earlier (€ 5.50; or €2.75 with Strasbourg Pass).  It was fun to follow  audio commentary as we navigated the city with the map guides that came with the audio sets.  While our teen preferred to explore on his own, our six-year old enjoyed having her own set  on (most of the time).

The walk is centered around picturesque Petite France – old quarters of the town’s tanners, millers, and fishermen dating back to the 16th century (even before the city became French for the first time).  Large portion of the walk is along the river and the canals;  we crossed several foot bridges. 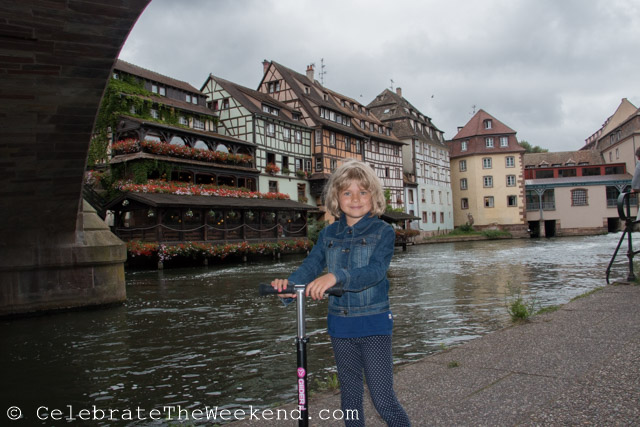 Did you know that Strasbourg’s entire historic center  is a UNESCO World Heritage Site (which makes Strasbourg the first French city recognized for its entire urban center)?   This status was awarded to recognize the Cathedral of Strasbourg, as well as an exceptional urban landscape, “characteristic of Middle Europe and an example of Rhenish domestic architecture.”

The beauty of the self-guided walk of course is that you can stop and continue at any time: we stopped at this playground not far from the Vauban Dam. 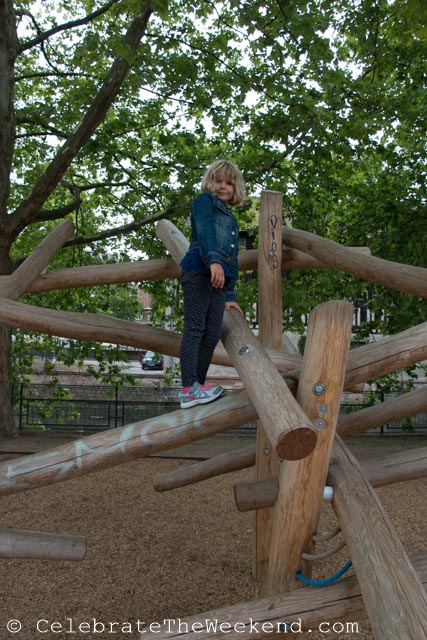 Having changed hands between France and Germany several times over the centuries, Strasbourg offers a unique mix of architectural influences. There are Medieval Gothic churches,  half-timbered German style houses, classic Parisian mansions, and numerous  examples of Art Nouveau and historical eclecticism of the late  19th – beginning of the 20th century (when the city was part of the German Empire).

We have not explored the “Imperial” or “German” quarter (1870- 1918) but here is its stately example, The Republic Square (Place de la Republique).

For her part, my daughter was fascinated with these modern sculpture groups on display near Cathedral Plaza. 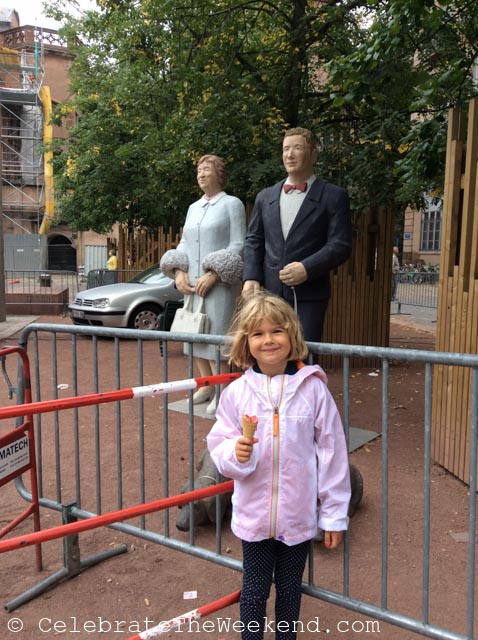 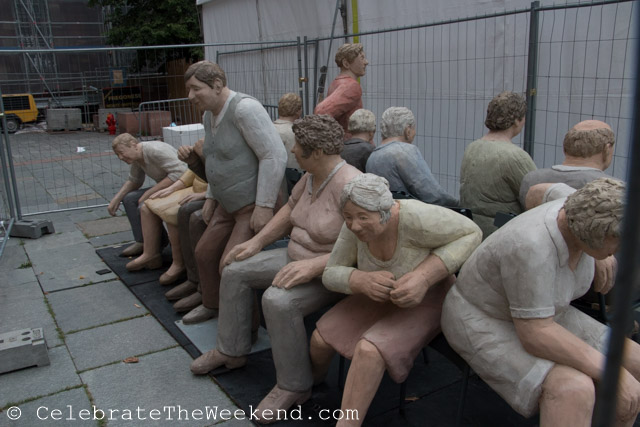 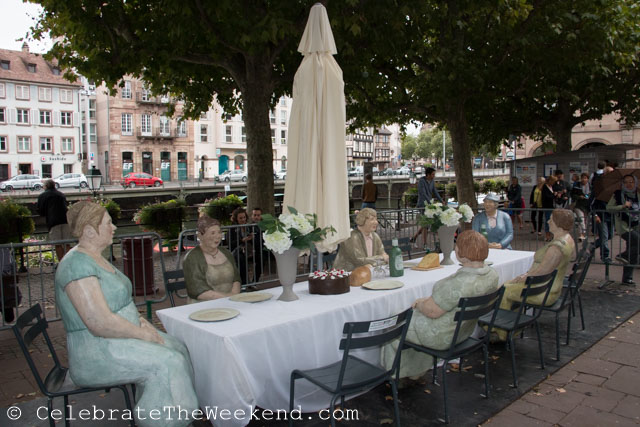 After a quick picnic lunch on the benches near Cathedral, we were ready to continue exploring.  (You see, when you have 6 hours in Strasbourg, you cannot afford spending it over a fine meal – but believe me, we have had a share of those during our stay in Alsatian countryside).

It was time to pay our respects to  Strasbourg’s famous Roman Catholic Cathedral  de Notre Dame. Constructed over a period between 11th and 15th  centuries,  it is considered one of the world’s most beautiful examples of late Gothic architecture.  At 142 meters high, it was also once world’s tallest building. 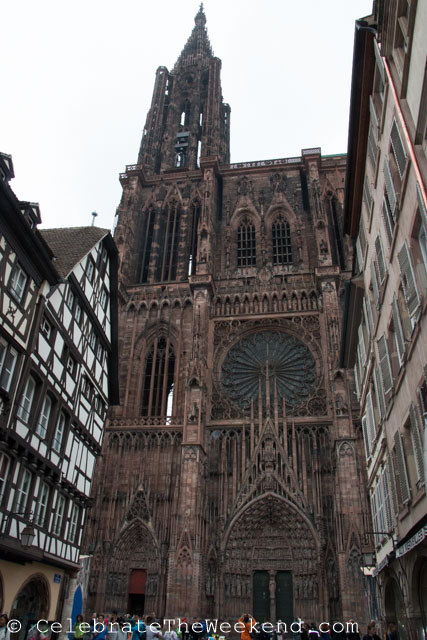 Having explored the magnificent inside of the Cathedral, we split into 2 groups.  The boys went climbing the Cathedral Tower and the girls went to the Palais Rohan (both free with Strasbourg Pass). 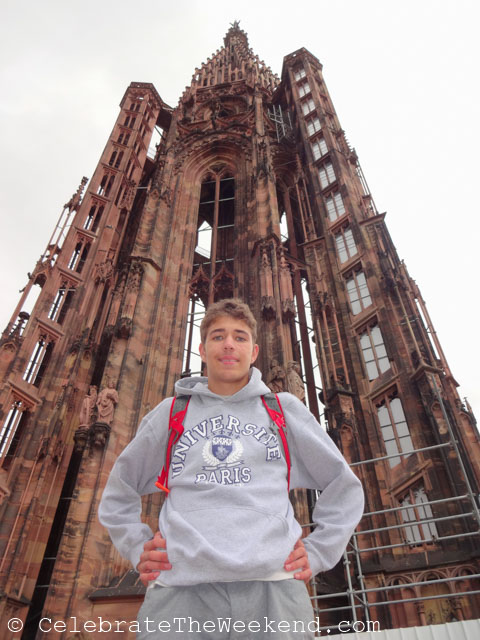 In the meantime, the girls enjoyed another marvel of Strasbourg architecture, albeit on a smaller scale.

Palais Rohan (finished in 1742) is a finest example of classic 18-century French architecture in Strasbourg.  It was constructed after the grand mansions of Paris by Robert de Cotte, the First Architect to the King, for the Prince-Bishop of Strasbourg.

It is small enough for your kids to enjoy and not get overly tired.

Palais Rohan now houses three other Museums: Archaeological Museum, Museum of Decorative Arts and the Fine Arts Museum, making it convenient to keep exploring should you wish (note that “second” Museum entrance is half price with Strasbourg Pass).   Frankly, we have had enough sightseeing for the day and after returning our guides to the Tourist Office headed to our next  destination of Baden-Baden, Germany.

For 18,90 € per adult (9,45 €-12,45 € for kids) the Strasbourg Pass could be used for 3 consecutive days and is purchased at Strasbourg Tourist Office (17, place de la Cathédrale ;Tél. +33 (0)3 88 52 28 25). It offers both free and discounted admission to museums and attractions and pretty much pays for itself.  For example, the boat tour (adult ticket  €12.50), Palais Rohan (6,50€ adult), Platform of the Cathedral (5€ for adults) sum up to €24  but with a Pass you would have saved  €5 per adult.  Since you could use the pass for 3 days, you could save even more with included visit to Astronomical clock of the Cathedral, half day bicycle rental, and 50% off second museum admission, mini-train tour, and audio-guide of the old town.

(Mini-train tour looked like it would be a fun thing to do with the kids.  In fact, we have taken this tour in another Alsacitian city, Colmar, with the same company and enjoyed. (Tours runs from Place de la Cathédrale April 4 to November 15; 40 min).

I love the “PASS” booklet itself – with indexed pages devoted to specific museums and attractions you have all you need literally in your hand. 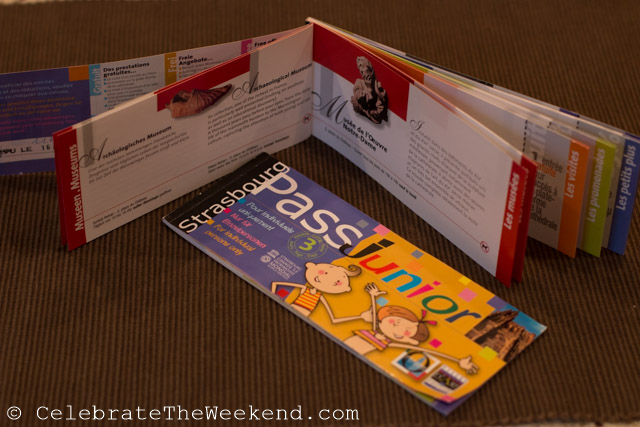 Have you experienced fun stop overs while road tripping (or waiting for a ride to your next destination)? Tell us about it in the comments!

We would like to thank Strasbourg Tourist Office for providing us with complimentary Strasbourg Passes and Audio Guides.

PIN THIS FOR LATER 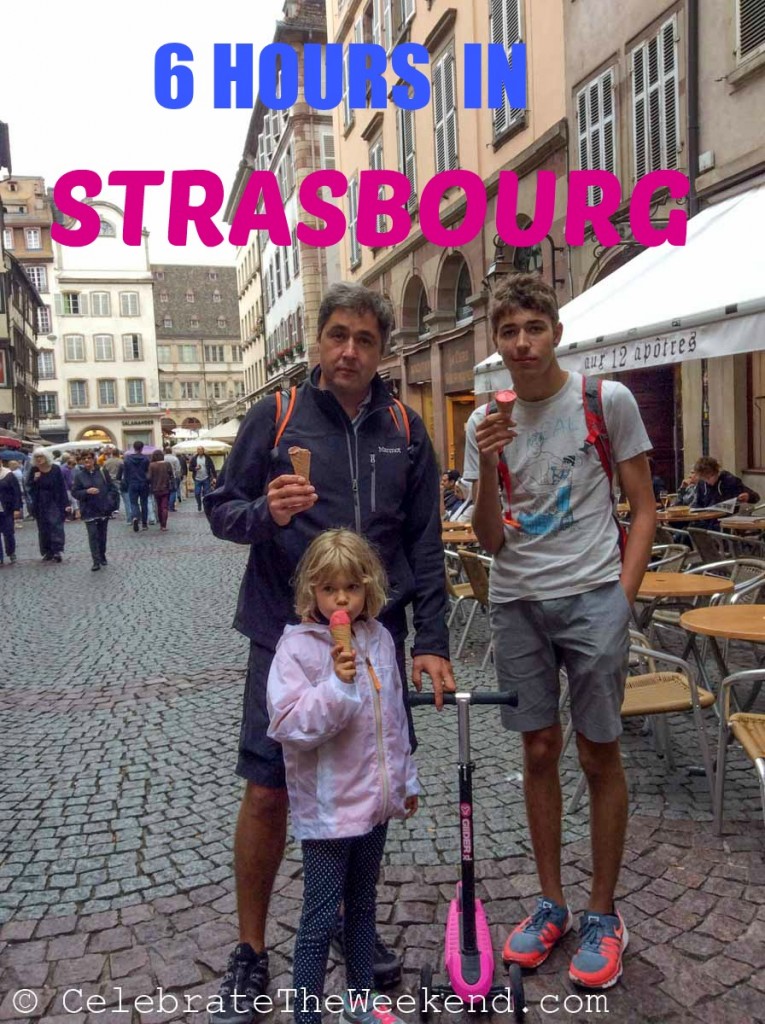 The post may contain links to affiliate booking sites which helps to support the blog at no extra cost to you.

10 thoughts on “6 HOURS IN STRASBOURG, FRANCE (with kids)”