Artistic Gymnastics World Championships 2017 is coming to Montreal on October 2-6 with 500 of world’s best gymnasts from 80 countries!  I am beyond excited that this world class gymnastics event is happening within a driving distance from my home in Boston.  Gymnastics Worlds have not been held in North America since 2003  Anaheim Worlds, in California.  I plan to be in Montreal for an entire week of competition and will bring you the updates on my social media and here on the blog (I will also be writing about the event for Russian sports daily).  Whether you will be watching the event live in Montreal or on TV, here is what you need to know about the Worlds to get ready to cheer your favorite gymnasts.

Montreal Olympic Arena holds a special place in gymnastics history. It is here during the 1976 Montreal Olympics, famous Romanian gymnast Nadya Comaneci earned her first perfect 10 at the international competition.  Nadya herself is going to be in Montreal as a Worlds’ spokesperson, but we are not likely to witness any 10s in Montreal this time.  The judging system underwent a major change in 2006.   The score is now the sum of D (difficulty) score and E (execution) score.  D score is technically open-ended but has not reached more than 6.6 in this year’s top international women’s events, and maximum E score is actually 10 (no one earned it yet since the new system was introduced!). Simone Biles, the star of the last Olympic cycle (who is by the way slowly making her way back into the competition shape after almost a year-long break) earned the score of 15,933 on floor exercise in the all-around final in Rio.  (Her D score was 6.8 and E score 9,133).

Montreal Olympic Stadium is one of the city’s major tourist attractions, but there is so much more to see in this most «European» North American city which is celebrating its 375th anniversary this year.  Read about Montreal’s TOP 10 that  I was able to pack into my busy gymnastics week.

First Worlds of the new Olympic cycles emerge on top of the myriad of changes and are especially exciting.  Many athletes retire following Olympics, the rules get updated (some scores de-valued) and the future stars of the new Olympics emerge.  (Simone Biles made her international debut at the post-Olympic Worlds 2013 which she won).

The question on everyone’s mind is whether the dominance of women’s team USA will continue.   In Rio they won team, all-around, vault and floor finals – 4 titles out of 6. (U.S. women also won an all-around title in the last four Olympics and a team title in the last two).   None of the five members of the U.S. golden Rio team is is currently competing at the international level, and legendary head coach Martha Karolyi (who led the team since 2001) has retired.  Women’s team is now headed by Valeriy Liukin, 1988 Olympics medalist and the coach and father of 2008 Olympic champion Nastya Liukin.

U.S. fans have reasons to be hopeful though. For one thing, there are still major ties to golden team Rio – as Rio alternates Ragan Smith and Ashton Locklear have been named to Montreal Worlds team (along with Morgan Hurd and Jade Carey following an intense selection camp).

There is no team competition held during the first Worlds in the Olympic cycle.  Four women and six men per country will participate in the qualifying round (with three athletes competing on any given event) which will determine the finalists in the all-around and individual events (where two gymnasts per country rule still stands).

With a goal of winning a maximum number of medals, the strongest federations are likely to bring 1 or 2 all-around contenders and fill the other 2-3 spots with strong event “specialists” who may have a chance to win medals in individual events.

U.S women have not lost an all-around title in Worlds or Olympics since 2010 (the latest four of them belong to Simone Biles). This is a lot to live up to, but new team leader, 17-year old Ragan Smith is capable to carry the legacy.  She is an “all-arounder” with no “weak” events, and a potential to also win a medal in beam and floor finals where her D start value is 6.2 (or higher) and 5.7 respectively.

With Simone Biles taking a break, the experts predict a very close competition this year on all events! Rio silver-winning Russian team is bringing two strong all-around gymnasts – a 17-year-old Rio “veteran” Angelina Melnikova (winner of recent European floor title and all-around Russian Cup) and a 16-year old newcomer Elena Eremina. Other strong all-arounders are home-country favorite Ellie Black (fifth in Rio all-around), Romanian Larissa Iordache (who is back on top after missing the Olympic season with injury; she was first all-around in recent World University Games and is showing a tremendous improvement in difficulty!), as well as Brazilian Olympian Rebecca Andrade who had a very solid performance in a recent World Cup event.  I followed Russian, U.S. and European events closely this year, but Chinese gymnasts might be the biggest surprise of the Worlds.  One of the highest D scores (6.6) registered this year belongs to China’s Liu Tingting (on beam), at the 2017 Asian Championships (where she won the all-around).

In individual events finals, another American gymnast, 17-year old Jade Carey is new to international scene but holds a highest start value of the U.S. team in vault (5.8 D Amanar ) and floor (5.8 D) and is likely to contend for the medlas on these two events.

The Russians are likely to aim for the gold at their “Olympic” event- the bars, but several gymnasts on Chinese, German and Belgian teams are capable of very high scores as well.

I am excited to meet several gymnastics legends in Montreal who are still competing at the top of the sport! 30-year old Romanian Katalina Ponor (who won three golds in 2004 Olympics) holds this year’s European beam title; 42-year old Oxana Chusovitina from Uzbekistan (gold in team 1992 Barcelona games) aims for a vault final, and a 33-year old Brazilian Danielle Hipolito will contend for a floor medal 16 years after winning her medal on floor exercise at the 2001 Worlds (she recently posted 6.1 difficulty at the FIG Challenge Cup in Varna).

The biggest legend on the Montreal arena is going to be without a doubt Kohei Uchimura from Japan, the winner of last 6 all-around World and last two Olympic titles.  Rio all-around runner-up and recent World University Games and European all-around champion Oleg Vernyaev , Ukraine, is also expected to compete, along with 2015 all-around silver medalist Manrique Larduet of Cuba (who sat out Rio with injury).  Russian Cup winner Nikita Nagorney and a runner-up David Belyavsky are getting the momentum going and seem ready to compete for the Worlds all-around podium.

I am also interested to see where the newly crowned U.S. all-around champion Yul Moldauer will fit in.  According to U.S. men’s high performance director Brett McClure, the goal for U.S. team at this Worlds is to expose more team members to the international scene.  The team selected three world championships rookies in Moldauer, Marvin Kimble and Eddie Penev and only using one all-arounder (Moldauer). The other three team members are veterans World vault medalist Donnell Whittenburg, Rio Olympic bronze medalist (pommel horse) Alex Naddour and a 4-time U.S. all-around winner Sam Mikulak (who is recovering from an injury).

For tickets and schedule, check out Worlds website.  While some events are already sold-out, there is still a chance to see some human potential defying gymnastics in the beautiful city of Montreal (the tickets are very affordable for a sporting event!). 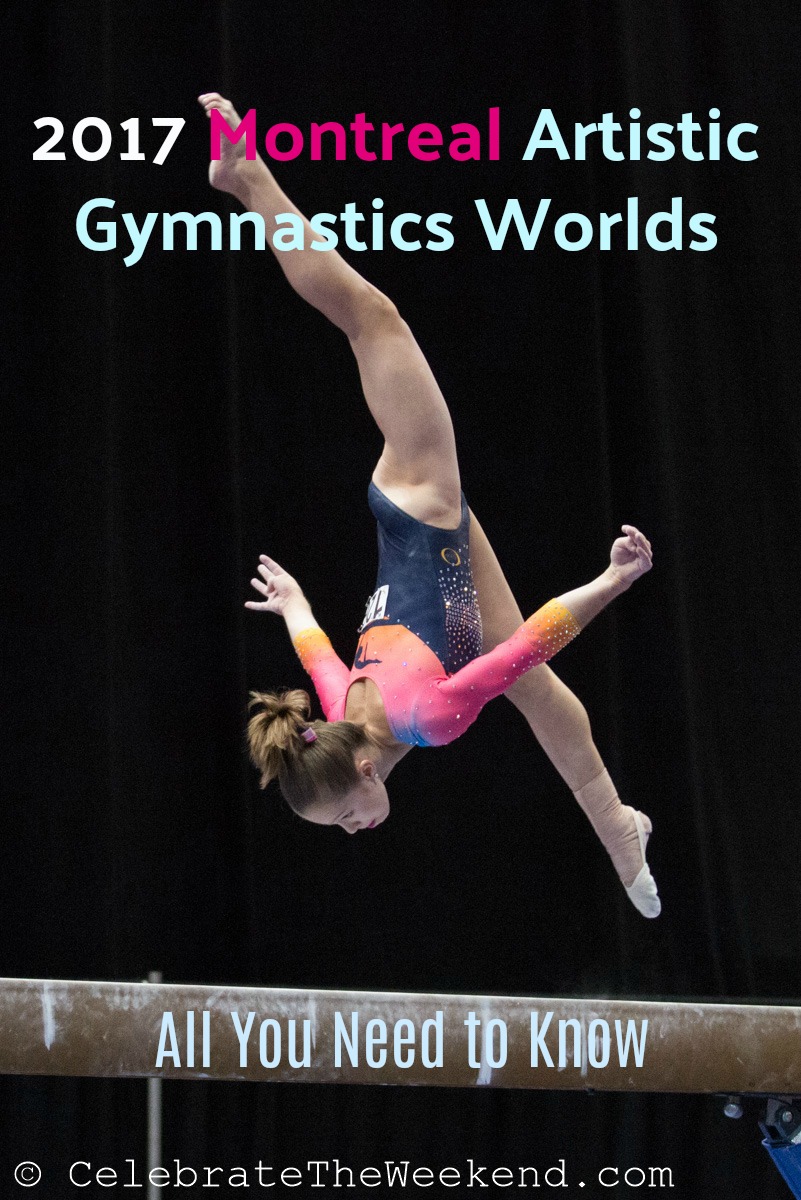