World Class Figure Skating – in a Town Near Me!

I spent last weekend celebrating the sport of figure skating at the Skating Club of Boston’s new state of the art facility in Norwood, MA.  Opened just before the pandemic after 20 years of “talking and planning”, “made by figure skaters for figure skaters” training and performance center features 3 rinks, the Micheli Center for Sports Injury prevention, Academic Center and dance studios (one of the rinks is being designated for hockey on certain times throughout the week).

The main rink –  also known as Tenley Albright Performance Center – has been named after Newton-born figure skating legend Dr. Tenley Albright- who (being a Harvard educated surgeon herself) donated the Academic Center so skaters have room to study between training sessions. 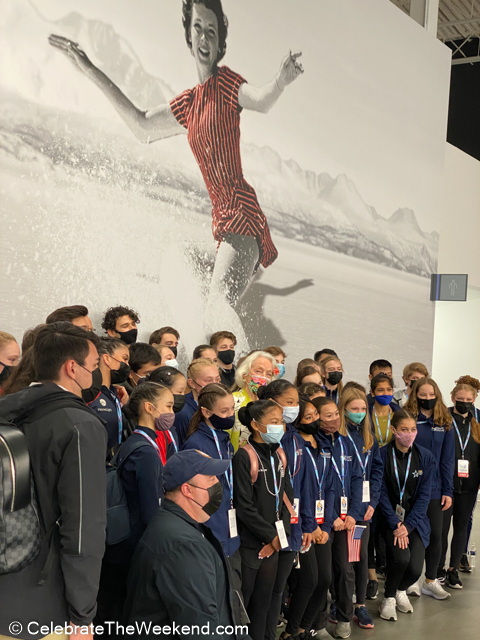 Doug Zeghibe, Executive Director of the Skating Club of Boston grew up skating in Club’s Brighton facility. That facility held many memories for many people  (including for Dr. Albright) but it was getting impossible to renovate and it only had one rink.  The sale was the main source of funding for the new rink.  It’s an event center designed with both training and competition-hosting in mind.  Over last month, the Center hosted 2 international events- Cranberry Cup in August (a long standing local pre-season event) and US International Classic -last weekend- which we are all hoping would become a local fixture as well.

Success for such place is not one-dimensional: “We need stable operation for building in terms of profit/loss, we need stable cash flow, but we also need to build champions, support people’s dreams- whatever they are-so they could say that place helped me get there,”  Doug explained.

Having the event facility for my favorite sport nearby has certainly been my dream.  I first noticed the Center by chance on my daily commutes in the spring of 2020– by then several coaching teams had already relocated to Boston.

As Covid pandemic hit during the building opening stage, Doug tells me he did not panic:  “It was a day-to-day focus for me,” he says, “how much money would we lose, how do we operate safely and follow protocols with so many different groups here. We had a goal: to stay open”.   Luckily, figure skating community is a compliant audience and the Club stayed open.  Masks are worn everywhere in the building (when not performing on ice during the competition).

One Event, Many Goals

US International Figure Skating Classic (held at the Center on September 16-18) is one of the first events of the figure skating season. Competitors (in men’s, women’s and ice dance disciplines) came from different countries and different stages of their career.  But there was also a common theme: “It is early enough [in the season so] you can change things without panicking,” noted US ice dancers (several times Worlds medalists) Madison Hubbel and Zachary Donohue. They won the ice dance event at the Classic (their fifth win at this event). (Here is a link to full event results).

Madison and Zachary are retiring from competitive skating after this season.  They said in the mixed zone that although it is an Olympic season,  they are taking a “step back” to “enjoy the steps along the way, to enjoy what we love about the sport”.

Event’s headliner – Russia’s “quad queen” Alexandra Trusova is taking her own steps on the way to Olympics later in the season. Trusova won the women’s event but could not match her recent 5-quad free skate performance at the Russian test event. Still, it is only the beginning of the season.

Ice dancers (and Michigan training mates) Russia’s Diana Davis and Gleb Smolkin and US’s Eva Pate and Logan Bye are in the first year of their senior careers with different goals in mind (both pairs had a very successful outing here at the Classic and won silver and bronze respectively).

As Smolkin noted, it is both “nerves, excitement and anticipation” as they begin their senior career.  “We are a new couple on a senior circuit, we need to compete more and we need for everyone to get to know us”.

For 15-year old Yoeonjeong Park, the silver medal she won here at the women’s event with only a couple of points behind Trusova gives her the confidence to  try going after one of the Olympic spots on Korean team.

Skaters from India, Philippines and Ecuador were trying to put their countries onto the world’s figure skating map.

Mental Training was another theme that came up often as I spoke with different skaters in the mixed zone.

31-year old Czech skater Michal Brezina who won men’s event admitted using the help of a mental coach for the first time in his career as he prepared for his final competitive season (and 4th Olympic Games): “I can’t imagine where I could have been in my career had I worked with the mental coach before.”

The Skating Club of Boston’s  Jimmy Ma who earned silver in men’s competition also admitted working with a psychologist but credits his new coaches (Olga Ganicheva and Aleksey Letov) with helping to propel his career (Ma has landed two clean quadruple jumps in his free program).

Maxim Naumov (2020 US Junior Champ, now in his first senior season) also trains at the new facility (with his parents Eugenia Shishkova and Vadim Naumov, former pairs world champions).  Maxim’s own “self-talk” is responsible for helping him land two quadruple jumps in his free skate (something he has not done in the competition before).   “I decided last night to do 2 quads… it is a mental thing for me- I know I can do it physically.  If I had planned it weeks in advance it would be hard. So I decided last night to go for it.”  He stopped for a second to give a shoutout to Jimmy Ma who was beginning his free skate at that very moment.

There is a lot of speculation that Alexandra Trusova might benefit from working with a sports psychologist. Trusova had successful run throughs with all five quad jumps of her free program in her practices here but only landed one of them cleanly (Salchow) during her free program.  Trusova did not speak with media at this event (it was not required) so we can only guess what has happened.

Figure skating is of course a juncture of artistry and athleticism (even more so in ice dance where the marks are arguably more subjective than in other figure skating disciplines).  Hubbel and Donahue debuted their new lyrical free dance to Drowning by Anna Sila (personally I love this team’s more dynamic numbers, including their short “sexy bluesy” dance to Janet Jackson’s mix (street dance is a required rhythm dance theme this season). Davis/Smolkin kept their last season Tango from Moulin Rough sound track for their free program- and are not concerned with too many others using this music before: “everyone can bring their own style” to it.

US’s Camden Pulkinen (fourth in men’s) always thought of himself as a lyrical skater and was not “fully comfortable” to skate to latin lover theme but grew to love his program (choreographed by Thomas Dickson) and enjoy audience clapping: “It’s so cool; always puts a smile on my face”.

My daughter was most impressed with Eva Pate and Logan Bye’s Hunger Games themed free dance that featured Eva’s dress color change from black to red.

Israeli ice dancers Shira Ichilov/Laurent Abecasis looked so much bigger on ice than in real life!  They told me their free dance is about how “two people can change the world by being together.”

Maxim Naumov, Jimmy Ma (silver in men’s) and Gabriella Izzo (bronze in women’s) did not have to leave their home practice rink to compete at the Classic.  Ma admitted it was a little “weird”  for him to compete on home ice with his teammates training in the rink next door, but Maxim Naumov acknowledged that he has fully enjoyed knowing “every corner” of the facility and not wasting any energy on little details.

For several US International Figure Skating Classic participants Olympic season continues with Olympic qualifications at Nebelhorn Trophy next weekend, while others prepare for Finlandia Trophy, Skate America, Cup of Russia and Skate Canada later this fall. And for the Skating Club of Boston’s next events- see the season schedule here. See you in Norwood!