There might  be something about the sound of the name (possibly coupled  with influences from 19-century Russian novels), but Lucerne has always had a magical spell on me.  It is difficult to match our own high expectations for a new place (or anything) but luckily Lucerne lived up to the promise. 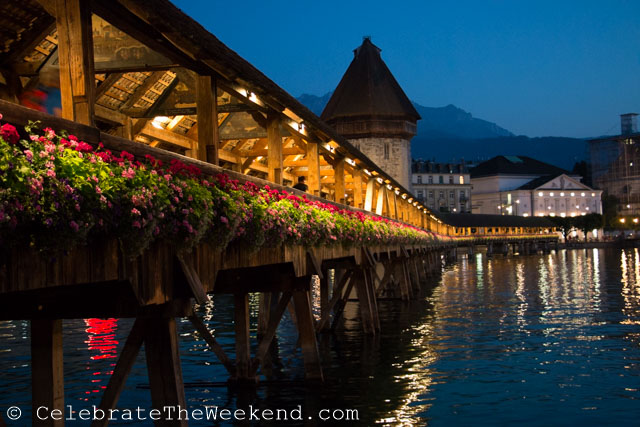 We “sampled” this magical town as part of our epic European road trip last summer.  It is located in Central Switzerland (just a 40 minute car or train ride from Zurich) and could easily be worked into your European road trip itinerary.

To choose your own Lucerne experiences, check out this Get your Guide booking site.

Despite its popularity as one of the most visited cities in Switzerland, we did find the moments of privacy for our pictures even though we have visited at the top of the tourist season last summer.

Here is how to share Lucerne magic with your family.

1. Tour the Old Town on Foot

We love exploring new places with a tour guide on foot, and so do our kids. (with an occasional help of certain transportation devices, such as a scooter we brought with us from the US).  Most of the Lucerne’s old town is a pedestrian zone and is a delight to explore on foot. River Reuss with its iconic foot bridges  certainly adds to the charm. The river roughly divides the city into “old” left bank and “new” right bank.

Lucerne Tourism Office has kindly provided us with our own tour guide, Ms. Lea Sommerholder, but there are a number of interesting and affordable group tours offered by Lucerne Tourism (You can choose the tours via this link here).

Climbing old city walls is typically a kid-favorite in the European walking tours, and close to 200 meters of Lucerne’s 14th century city wall remains, with 3 of its towers open to the public.  Climbing was challenging for some adults in our group (largely due to the heat), but the views from the top onto the town,  Lake Lucerne and surrounding mountains  were rewarding.

Be sure to visit Zyt Tower which houses the city’s oldest clock (dated 1535). The clock chimes every hour one minute before all the other city clocks (there is a clock museum inside; free admission).

Here are some of the other tour highlights (to get your appetite for Lucerne going):

Old Needle Dam  is still a working operation. The so-called «spikes» are lowered into or withdrawn from the water manually to regulate the water level of Lake Lucerne.

Constructed in first half of the 14th century, Chapel Bridge (named after nearby St. Peter’s Chapel) not only connected right and left shore parts of the town, but along with the Water Tower was part of the city’s fortifications.

The paintings under the roof of Chapel Bridge showing the scenes from Lucerne’s and Switzerland’s history were added in 17th century. Parts of the bridge and 85 of the 110 paintings were destroyed in the fire in 1993, but they have been replaced by paintings from the second part of the bridge which were preserved from 1834 when that portion of the bridge was dismantled to make space for the lakeside avenue.

On the “new” left bank, Culture and Convention Centre Lucerne (The KKL Luzern) at Europaplatz (the work of the Parisian architect Jean Nouvel) is one of the finest concert halls in the world. Museum of Art – the fourth largest in Switzerland – is also part of the complex.  Annual Lucerne summer music Festival is held here and if you are making plans to visit in the summer of 2016, be sure to check out this festival link.

The sight of  lake Lucerne with its surrounding mountains was one of the most awe-inspiring memory of our European trip. 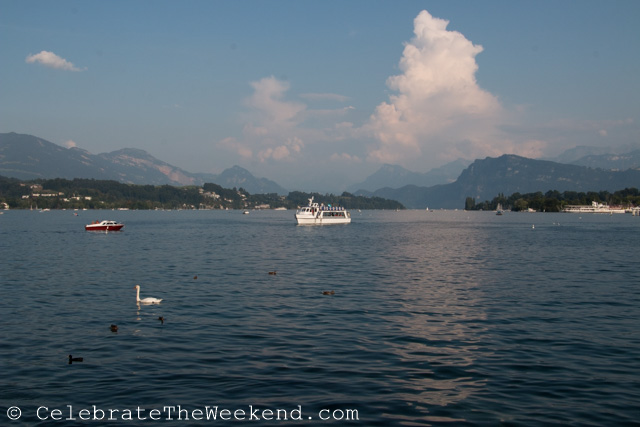 Taking a walk along the shore promenade from central Schwanenplatz (Swan) square is a great way to take in the lake’s beauty. The kids could use the periscope. 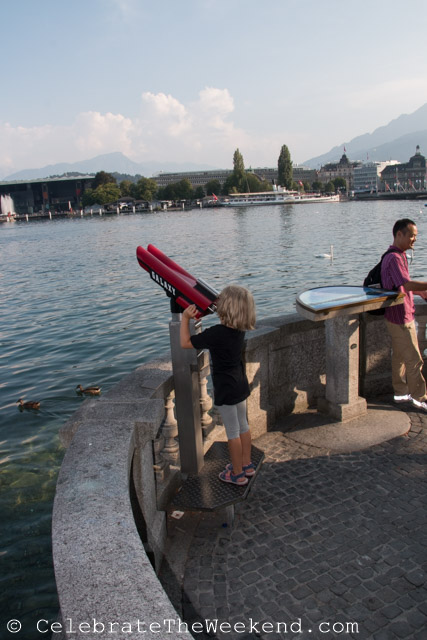 There are several grassy areas to sunbath (and even take a dip in the lake). This one is next to the Museum of Transport, about 20-minute walk from the town center.

There are also numerous boat options available for touring the lake.   We enjoyed a 90-minute cruise from Lucerne to Alpnachstad as part of our Mount Pilatus Golden Round Trip excursion.

3. Mount Pilatus Excursion is a family-friendly “introduction” into Swiss Alps which could be done as a day or half-day trip from Lucerne.  (And you have not really seen Switzerland without making your way to the top of one of its mountains.)

Golden Round Trip (offered May to October) which we took last August includes a 90-minute Lake Lucerne boat cruise from Lucerne to Alpnachstad, followed by the world’s steepest and oldest cogwheel railway ride to the top of Mount Pilatus (4618 meter stretch) at 48 % maximum gradient (40% average).  You come down via aerial cable car that is changed for a panoramic gondola at Frakmuntegg. (“Silver Round Trip” is offered year-round and instead of the Lake Lucerne cruise, there is a train ride from Lucerne Train Station to Alpnachstad.)

At the top, there are several short walking trail options for hiking and exploring the flora and fauna; as well as a Panoramic deck, and restaurant terraces to take in the views.

There are kid-friendly attractions at Frakmuntegg (roap course and toboggan slide).  We tried tobogganing, which is fun but not 100% fall-proof.

I am not particularly fond of the heights, but found all parts of our Mount Pilatus trip very enjoyable (truth be told, I have not tried the toboganning).

Swiss most visited museum presents the past, present and future of transport and mobility.  In its 56-year existence, this self-financed museum developed a unique collection of historical objects that are displayed in the hands-on explorative space appealing to multi-age audiences. There are sections devoted to cars, water navigation, rail, road, cable and space transport; as well as planetarium and media factory.  It is probably going to be the most unique museum you will ever experience.

We only had a couple of hours to explore, and could have easily spent several days in this traveller’s paradise.

Lido Beach right next to the Museum of Transport offered a much needed relaxation and comfort after a busy sightseeing day.  For a small fee you get access to a sandy beach, changing areas, showers, self services cafe with lake-side terraces, pool, playground and various sporting areas.  Open until 8pm in the summer.   We entered later in the afternoon and paid 5 CHF per person, kids under 6 free.

I don’t know about you, but I could feel the magical aura of Lucerne even through these quick late afternoon shots.

Tips on Food and Lodging

Food and lodging are expensive in Switzerland for those of us on the budget. We did manage to find a place to dine near St. Leodegar  Church with a “partial” lake view, just a few minutes walk up and away from Promenade. There is also a very reasonably priced self-service café inside the Coop supermarket near Lion Monument at Zuirichstrasse 9.   For a  reasonably-priced lunch on the outside terrace overlooking the Lake, try Café du Ville at Schwanenplatz 4 (we did not get to eat there as they close early).

The cheapest family hotel room we could find at the peak of the  summer tourist season was still over 200CHF  (Hotel Rosli) and while the rooms were rather spartan, it was in the city center and had a small pool which we  took advantage of during the heat wave of summer 2015.  (We parked the car at the nearby “Kesseltrurm” garage for 25 CHF per day.

We would like to thank Lucerne Tourism for arranging our complimentary media passes for most of our excursions in Lucerne.  This article contains affiliate links to a hotel booking site.  Clicking (and booking) on these links will not cost you any extra.

PIN THIS FOR LATER 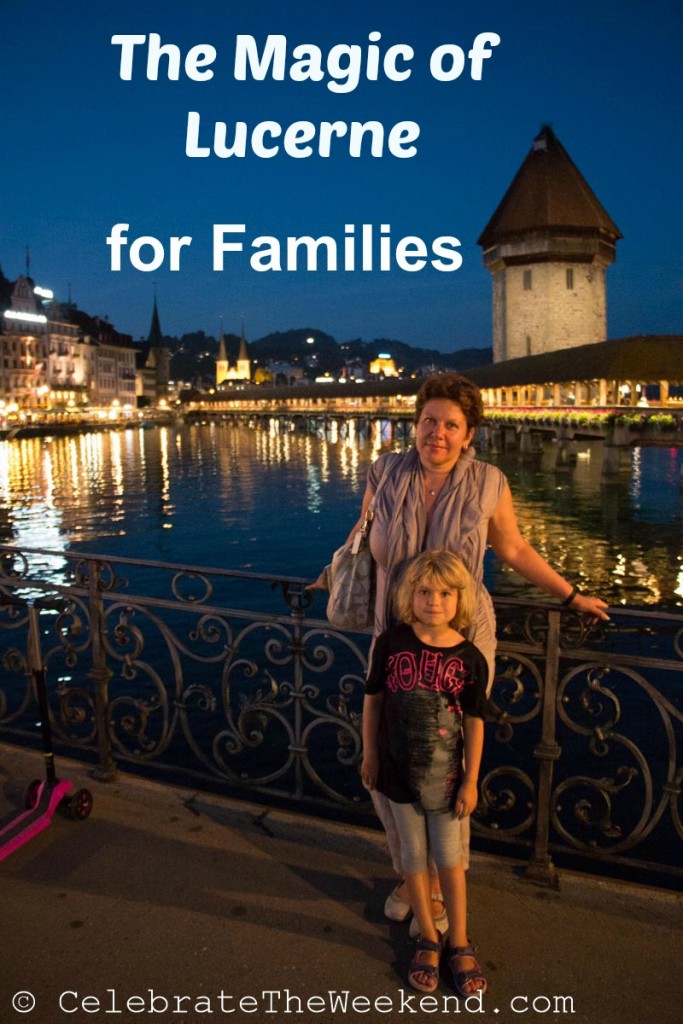 The post may contain links to affiliate booking sites which helps to support the blog at no extra cost to you.

5 thoughts on “The Magic of Lucerne for Families”